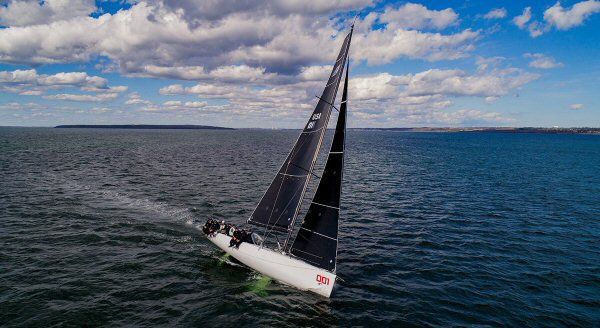 A request for a handicap was made in mid July 2020 for use during the season until a formal review by Central Council can be conducted for this boat in the off season.  It was agreed a preliminary rating can be provided.

The IC37 by Melges was designed by Mark Mills as a one design vessel for the NYYC. Mills Design No. 102 is reminiscent of the C&C30 HP OD and other IRC optimized 35-45 footers. Specifications are included in the handicapper’s model or at https://www.melgesic37class.com/about

The first step used to determine a rating was to find boats currently rated on the lake that are similar.  As Lake Ontario has not seen a large fleet of high performance, state of the art one design vessels of this caliber in a number of years, the comparable boats are extremely limited.  The handicappers model set for this boat, choses two boats, and a third historical boat was added to provide another reference. The boats used were:

The filters that were set included:

The IC37 is a sports boat by all accounts thus the emphasis on the sport boat index, the use of the FS-SP was to knock out many of the smaller and slower classes and the waterline and SA/Disp to get the right upper limits, the lower limit creates a lot of noise unfortunately in the 30-34 foot range.

A further consideration was other rating systems.  Do the boats in question have an IRC, ORC, or ORR rating and is there a polar for each boat in the evaluation? Lastly, the designer / manufacturer of a boat typically provides a suggested rating, and Mills/Melges is no exception.  The suggested ratings are:

Outside of the data in the comparables section of the Handicapper’s model, US PHRF fleets online certificate databases were reviewed for current certificates.  The rare status of the MC38 and Soto 40 was confirmed, with fewer than 6 of the two. ORR had a few boats as well, but the scant data resulted in just a rough check for the GPH handicap level.

Lastly, each of boats in the comparison had polar charts, mainly from the manufacturer or North Sails.  This resulted in the ability to hone in on what the boats actually do in a WW/LW capacity at 8 knots.

The handicapper’s model with all sections was completed with the materials found for the IC37, Farr 40 OD MH, Soto 40 and McConaghy 38.

The ASP for the boat was targeted at -3. The SP was back calculated as it is a One Design, to be the ASP – Adjustments = SP.

The handicapper’s model yielded a calculated rating of -3 ASP and -18 SP without the protect the fleet. The average of US ratings was -8, mainly influenced by the average ASP of the three boats found in Narragansett Bay (-9,-6,0), if set at -9 the base boat it would yield a -12.

To reinforce the rating the polar charts were used to compare the boats performance three different ways.  The boats velocity made good at 6, 8 & 10 knots were compared up and down wind (WW/LW 50%/50% course).  The VMGs from the IC37 where assumed to the be the base speed and the three comparables[1] were used to see what percentage faster or slower they were at the various weighted windspeeds (25% at 6kt TWS, 50% at 8 and 25% at 10), then their PHRF-LO rating was adjusted by the percentage difference using the TOT correction factor to yield an implied rating for the IC37.  The standard ((566.431/(401.431 + PHRF) was tested against the alternative ((650/(550+PHRF)) and the base PHRF rating was substituted using the IRC values for the boats converted at ((650/IRC)-557).  The math is in a separate spreadsheet.

This work said that the IC 37 rating is:

PHRF-LO has a “soft” rating for the Farr 40 OD at 6 s/m while all other fleet start at 0, and average -2.  The VMGs from the polars at 8 knots do confirm that upwind the IC37 is faster than the Farr and downwind it is a wash, despite the symmetrical on the Farr 40 OD.  The real surprise is the closeness of the MC38, given the extra sail area.  The MC38 is lighter and has a longer waterline, but the extra sail area is just barely noticed at low wind speeds.

The IC 37 One Design FS-ASP rating should be -3, based on the comparables listed, however using the US averages would drive it closer to -9 (rounded -8, as PHRF-LO uses 3 second increments), which is what the FS-ASP is after the application of the -6 protect the fleet.  This is consistent with the range of boats in Narragansett Bay (base boat is -9; with one each at -9,-6,0 which is odd given that this is an OD fleet).

The reverse calculated IRC values do indicate an even faster speed potential (-18) but given the average wind speeds we have 8 knots and Mills/Melges suggestion for IRC which is almost identical to a Farr 40, the upper end of the range band (-3) seems more consistent a value than the other comparables (MC38, Soto 40).  This factors in a “soft” Farr 40 OD MH rating on Lake Ontario.

The NFS and P2P rating are driven off the FS rating.  The NFS delta for WL8 does hit the maximum cap of 33, which is consistent with the type of boat.

The protect the fleet will of course be reviewed with race data in future years.

All available upon request.

[3] As we are reverse engineering the SP to suit a One Design Rating, the practise of having an SP divisible by 3 is being ignored.